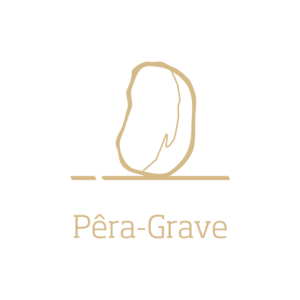 The connection of the Grave family to Quinta de São José de Peramanca dates back to the early 20th century. It was in 1913 that João Grave’s great-grandfather acquired these lands and since then this property has been the center of the Agricultural House of the last four generations of this family, traditionally linked to agriculture and cattle raising.

The current owner João Grave, takes control of Quinta de São José de Peramanca, having decided from the outset to bet on wine production as a way to make the property more profitable.

Citrus yellow color with a clean aroma marked by citrus fruits, lime and box well matched with a subtle touch of vanilla typical of the wooden stage.

Fresh and mineral taste in the attack, confirms the citrus fruits and a buttery surrounding that gives a feeling of volume that fills the mouth.

In the mouth shows a great complexity and a lot of persistence.

On the palate the first sensation is the ripe black fruit and chocolate, evolving to the complexity given by the wooden stage.

The well-present tannins are soft giving a velvety body to the wine.

Inky color with aroma of ripe fruits with black plum, blackberries and a floral touch of violets, typical of Touriga Nacional.

On the palate, the black fruits are well matched to the wood, giving it great complexity alongside the velvety round tannins responsible for the volume of the mouth.

Deep reink color with aroma of ripe fruits such as black plum, blackberry and pepper, spices and cocoa.

On the palate are confirmed the black fruits and cocoa well married with the elegance of french oak.

Full-bodied with the presence of round tannins and a good volume of mouth.